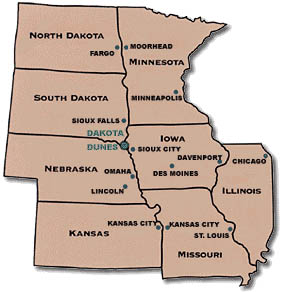 Dakota Dunes is conveniently located five minutes from downtown Sioux City, Iowa, which is the center of a metropolitan area of approximately 168,000 residents. Air travel to and from the area is accessible through the Sioux Gateway Airport, just 10 minutes south of Dakota Dunes on Interstate 29. The airport is currently served by American Airlines.This airline allows connections nationally as well as internationally via its major hub in Chicago.

Dakota Dunes is about one hour south of Sioux Falls, South Dakota–the largest city in the state–and about 1 1/2 hours north of Omaha, Nebraska. In addition, Dakota Dunes is easily accessible to Minneapolis, Kansas City, Chicago, and Denver.